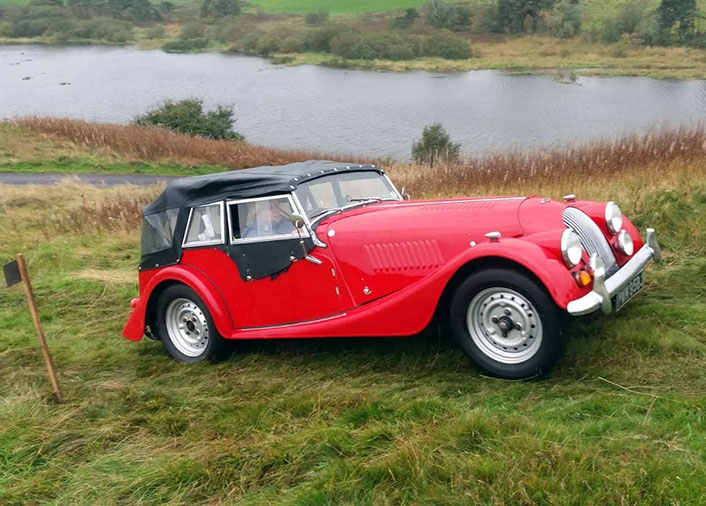 The day started with the knowledge that wet as it was it was to get worse. However, we had an excellent turnout for the second last event of the year at Forrestburn. Some 16 entries, a mixed bag of old and modernish. As always we were short of marshalls with only 3 and 4 hills, this was resolved when Les Connet came to the rescue, so off we set.

The going was better than expected with a fair number of zeros achieved on all hills. Yours truly had a sick Midget, clutch hydraulics only allowing for racing start and carb trouble forcing my early demise from competing. (note to self – fix it by Nov 4th).

It was good to see some new faces at this event, in particular, Andrew and Roger Millar in an MX5 and David Millar in his Renault Megane coupe. They all found it a new experience and with some ballast and tyre pressures dropped to the low limit, they should improve next month.

Morning runs were over it was lunch time and panic set in when we realised we had slightly more to cater for than we expected.  Fortunately, some folk brought their own victuals, so all were fed, though not before Shonah had converted a few meat eaters to the delights of a veggie burger. Marion was a wiz with the tea and coffee demands for all, and we are thankful for the hot water urn we invested in earlier in the year.

As lunch ended the worst of the weather arrived, I offered my services as an assistant to Donald on hill 2, allowing me to get some action pictures. Undaunted, everyone pressed on with most scores dropping despite the wet conditions. The Austin 7 brigade were particularly oblivious to the wind-driven rain and drove with great enthusiasm cheering each other on as they reached the top. Hooligans is the word that comes to mind, but great entertainment. Derek and Sandy were running very close, but eventually Sandy got the lower score. Hope Derek will allow you to share the Midget next month! One competitor was to impress all day – a certain John Miller in his automatic Midget (Fidget), clearing every hill both morning and afternoon. A combination to challenge the best of PCT experts. We finished the day with everyone thoroughly wet and cold but having had a delightful fun day (crazy folk).

Results are available here and congratulations to all the winners. A huge thanks to the marshalls, Les, Campbell, Donald and young Jack and dad. Also the catering team, Shonah and Marion and of course Jonathan for organising a great day despite the conditions. Roll on November the 4th.

Meanwhile here is a photogallery of the day: