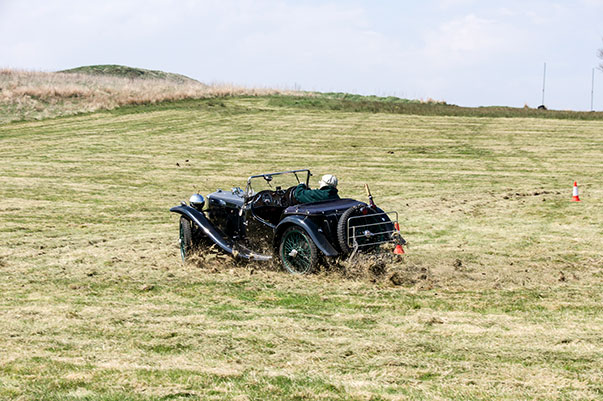 John Crae sent us a big collection of images from the Autotest held at Forrestburn on 8 May 2016 – here is a selection but if you want to see more please get in touch. 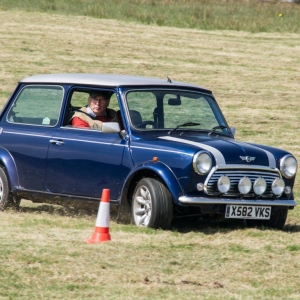 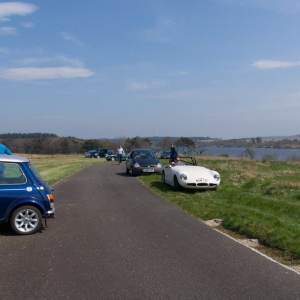 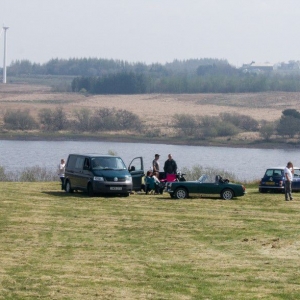 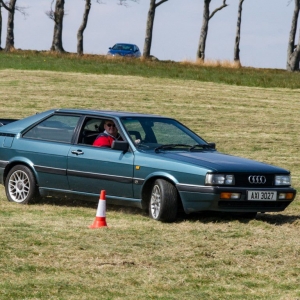 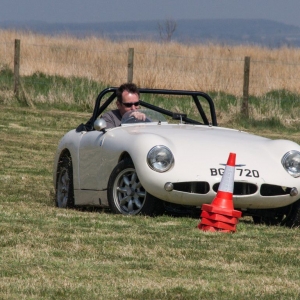 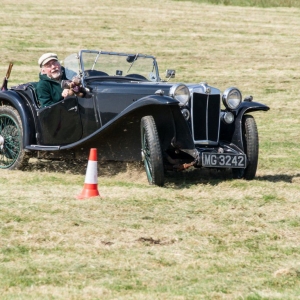 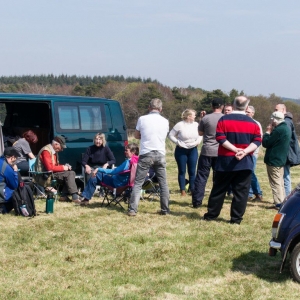 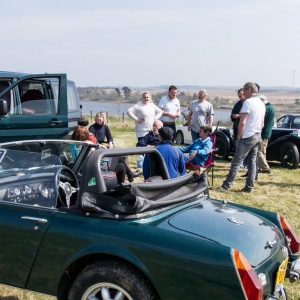 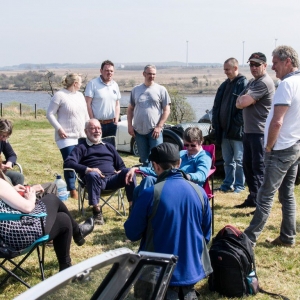 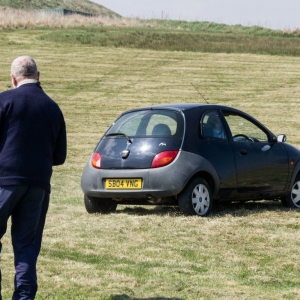 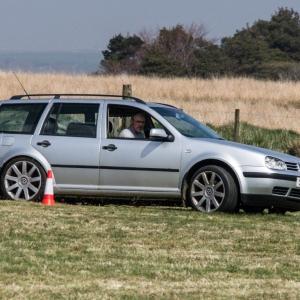 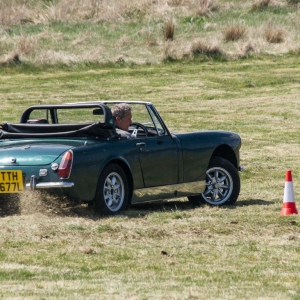 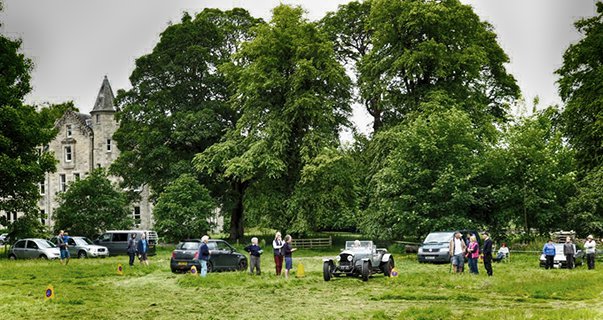 From MX5’s to M5’s, from Bentleys to “gentlys”, they came, they saw and they (sort of) conquered at the annual Coulter grass Autotest.

For some, memory was in shorter supply than traction and there were frequent cries of “wrong direction”. The weather remained dry for most of the proceedings although the grass was very slippy. At one point, dogs outnumbered competitors and finally, an invasion of chickens after the last test brought the event to a close.

Thanks, as always to the land owner, to Ros for taking care of all the documentation and the timekeepers as well as all who helped set up and clear up the tests. Thanks also to all the competitors who tolerated much ribaldry when things didn’t go quite according to plan.

Here are a few images of the event, courtesy of Trish and Donald MacDonald. Text also from Donald. The results are available on our events page or directly from here. 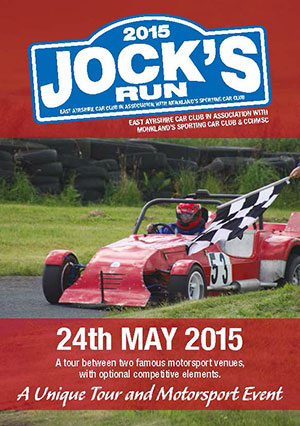 To mark Jock Millar’s remarkable career in motorsport – at 82 years young, he is the oldest person holding a race licence in Scotland – and his contribution to the fabric of motor sport venues, East Ayrshire Car Club, in association with Monklands Sporting Car Club and CCHMSC, will hold a classic car run from Forrestburn hillclimb to Kames Motorsport Complex. At Forrestburn there will be an opportunity to ‘run up’ the famous hillclimb. This is strictly non-competitive. There will also be optional production car autotests at Kames Motorsport Complex.

Jock’s run will be held on Sunday 24 May 2015 and is organised by the East Ayrshire Car Club in association with Monklands Car Club and CCHMSC. Signing on will be at Forrestburn Hillclimb. Prizegiving, with a snack meal for the crew of two, will be provided at the Finish at Kames Motorsport Complex

Cars constructed before 1980 will be given preference for entry.

You can download the regulations and entry form from here. 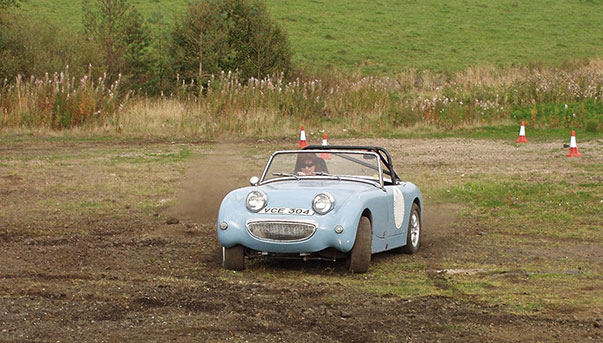 Well people, it’s that time again, the start of the season. Our season warm up is on Sunday 12 April with the gates open from 11:00hrs. and the hill open from 12:00 till 15:00hrs. As always helmets MUST be worn. We will also have an auto-test demo as per the end of last season, if for no other reason it’s worth coming just to watch Scott Clements in his pirouetting Clan!

The barbecue will be available should you wish to bring something to cook for lunch. Tea and coffee will be provided.

Due to the popularity of these events we are having to limit numbers to 30 cars.If you turn up on the day hoping to get a run, you may be out of luck so as it’s first come first served in order to ensure a place, let me know as soon as possible that you intend to come. Contact shonahgibbon@ymail.com or 07518146950.

The cost is as £25 per car not per driver but drivers must be members as club insurance does not cover non members. Non members can join on the day, with an annual membership at the bargain price of £20.

Look forward to seeing you on the day. 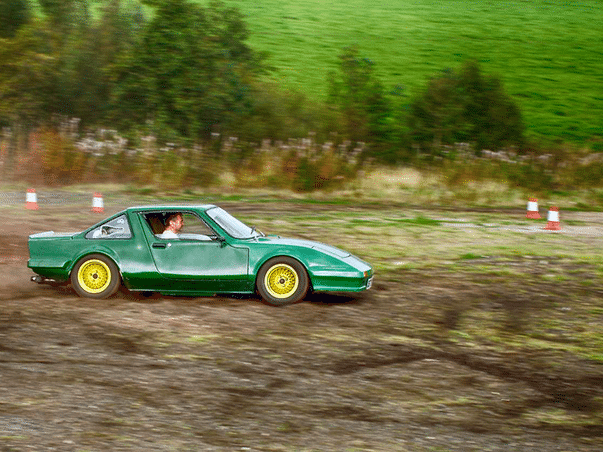 On a glorious afternoon, the end of season track day on 21/09/14 attracted the usual enthusiastic entrants plus some new faces and some different cars.

In a new twist (and many turns), a non-competitive auto test was available for anyone wanting to try something different while taking a break from running up the hill. As always in auto testing, it appeared that the machinery was willing but the memory was weak and it took a number of tries for entrants to follow the correct route, generating much hilarity for, and jocular verbal abuse from the onlookers. The irrepressible Scott Clements again tried unsuccessfully to launch the Clan’s pistons into the stratosphere with his own exuberant style and liberal interpretation of the test route. The four-wheel steering on the Honda Prelude was a definite asset and enabled the big car to demonstrate surprising manoeuvrability.

Everyone who tried the test finished with a big grin on their face and we hope that next year, there will be some new entrants for the club auto tests.

Thanks to Donald for the text and Trish for the photos. 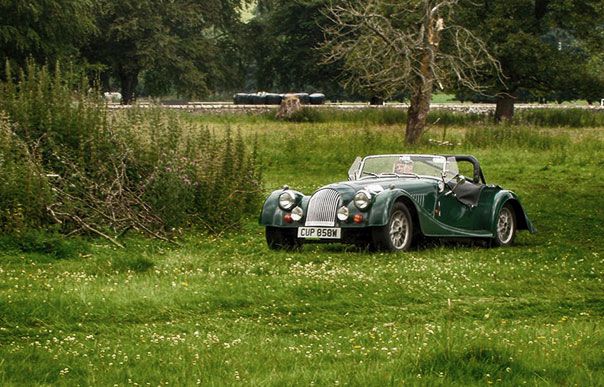 Thanks to Archie Bell for this great write up of the day and to Trish McDonald for the pics and to John Miller for the gallery shots at the foot of the page.

Sunday 20th July dawned quickly, especially for me as I’d got the dates mixed up and thought the Coulter Autotest was a week later. Only an email late on Saturday asking if I could still get an entry for the 27th turned up the need for an early start on Sunday – thanks Ros!

There had been downpours late on the Saturday evening and the paddock at Culter Allers might have been a little bit swampy. Not so, the surface was dry, the grass long enough to allow predictable sliding with little chance of getting stuck, and a wee breeze got up later which kept the midges away.

Tests 1 and 3 were more-or-less logical, but many got wrong directions on the first runs. Andy Baillie spoiled what was to be a clean run of fastest-in-class by spinning; Colin McLachlan in his MG PA beat cars 60 and 70 years younger to take fastest in Class 3 for sports cars on Test 1.

Steven made Tests 2 and 4 an Alzheimer’s test; there just didn’t seem anything logical or memorable about the wibbly bits on each side of the woodpile. All the same a couple of folk hadn’t noticed that a full lap was wanted but the penny dropped on seeing the first runners hanging it all out all the way round. Andy was back on form but shaded by one second on each test by Jamie Gibbon in the faithful Micra.

After a leisurely lunch and checking out the fly-off bog handle on the vintage toilet we went back to the layout called Test 4 for Tests 6 and 8. (Confused yet? Just wait.) A tree was added to the cone layout from Tests 1 and 3 to give an open flowing test; Andy Baillie was fastest with Jamie not quite able to keep up. Scott Clements was literally getting into the swing of things with all that weight at the wrong end of the Clan and was able to equal Steven’s time in the other rear-engined car by the end of the day. Steven maintains he wasn’t practising after lunch but making sure he could get the Porsche round the cones?.

Over the course of the day, competition in Class 3 (for cars with LSD) was close in the middle but Geoff and Benny taking wrong directions in the Mazda dropped them behind Donald in the Subaru. Simon Scott’s Morgan +8 looked a lot of fun and made enough woofly noises to drown out the gurgling of oil wells into the 3.5 litre beastie. Jock Mackinnon was sliding his Bentley around the tree showing that cars designed by a locomotive engineer don’t need to run on rails.

Meanwhile back at the woodpile, Brian Hopkins struggled to make sense of Test 4 which didn’t exist and was the same as Test 2 but in reverse and now called Test 5 with Test 7 to follow. The Tour de Woodpile was getting more polished and consistently slippy so most drivers were holding quite respectable drifts with only a couple of spins; if there’s ever a big bonfire in Coulter we?ll be lost without our landmark.

While Ros did the sums on the time cards the traditional non-competitive knockout pursuit sprint-round-the-oval kept everyone amused. Top and bottom corners looked the same but a bump hidden in the grass at the top end threw a few into a spin; NASCAR doesn’t have to contend with these hazards and they don?t know what a laugh they’re missing. 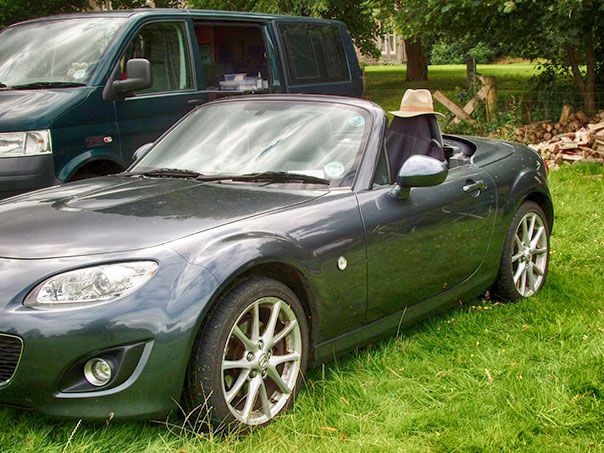 To wrap up, huge thanks to the McCosh family at Culter Allers House for letting us furrow their paddock once more. Thank you too to all the team and friends for setting out tests and barbecue, managing the entries, keeping the watches ticking and doing the sums. The weather held out, I didn’t need my wellies, and Colin?s umbrella stayed stowed at the stern of the PA. Roll on Coulter 2015!